skip to main | skip to sidebar

Anwar: Mark Nov 28 on your Calendars

Opposition leader Anwar Ibrahim today said that "something big" will be happening on November 28, but declined to elaborate further.When pressed by reporters, Anwar merely said "You'll see". Then he giggled and ran away.

Posted by The Malayan Times 9 comments:

Kuala Lumpur, Sunday - Fitness First branches throughout the country today reported an alarming rate of conversions to Hinduism, especially among its Yoga students.
A Fitness First instructor, who only wished to be known as Nora, said that even though the students consist of people from various races and religions, they have all "somehow found Hindusim".
"We suspect the breathing techniques," she said. 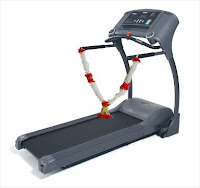 Meanwhile in a separate incident, there was commotion in a Celebrity Fitness gym today, when Yoga practitioners stopped maintenance-staff from removing a treadmill.
A Celebrity Fitness instructor who declined to be named said the the Yoga students had declared the treadmill as a "Holy Treadmill" even though the treadmill belonged to the gym.

Posted by The Malayan Times 7 comments: 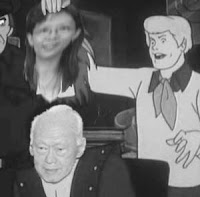 Kuala Lumpur, Wednesday - Special Investigative team Mystery Machine revealed today that Seputeh MP Teresa Kok is, in fact...Lee Kuan Yew.
When asked what had given her away, team spokesman Shaggy said that her constant lawsuits against Utusan Malaysia was the first clue.
Shaggy denied Kok/Kuan Yew's claim that they were taking revenge on her/him because of her/his constant reference to team member Scooby-doo's favourite Scooby Snacks as "prison food".
In a statement issued through their lawyer, Kok/Kuan Yew said that they would have gotten away with it "if not for those meddling kids and that pesky dog" and vowed to get her/his revenge "if it's the last thing I ever do".
In a separate but related incident, cerpenist Chamil Wariya denied widespread rumours that he is actually Velma.
Posted by The Malayan Times 2 comments:

Nothing in this blog is true. I would've thought that would be obvious to everyone, but apparently it isn't.